According to the journal I kept in second grade, I wanted to be one of two things when I grew up —
a journalist or a "well-educated singer." I have a really bad voice.

I'm an accomplished storyteller — journalist, technology and innovation writer, music reviewer — with a relentless curiosity about people. From spending two years covering an infamous murder trial in Marin County to interviewing innovation leaders from all over the globe, I continue to ask questions aimed at driving change, boosting business, and bettering the world. 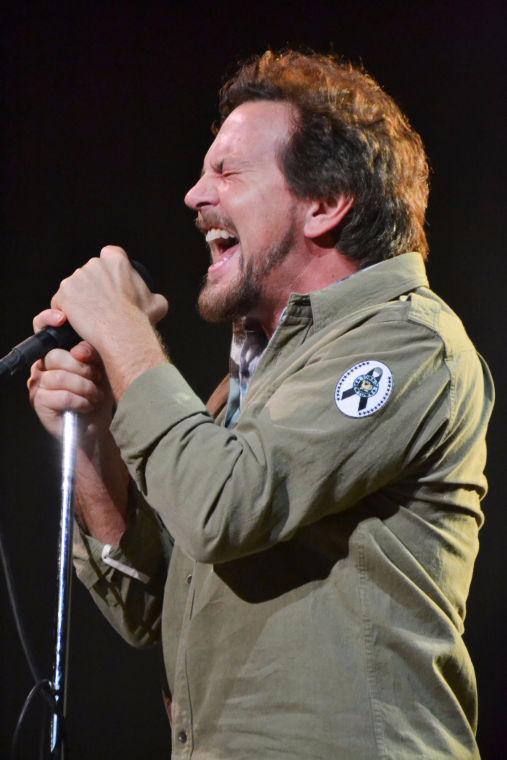 It wasn’t Pearl Jam’s nearly four-hour, double-encore set that generated the feeling, but rather a moment of genuine kindness.

As I approached a door where 15 photographers waited to be escorted backstage, I panicked that I wouldn’t get my review pass in time, and failed to absorb my surroundings.

I walked by, what I assumed was, a handicap entrance and passed a few children and young adults in wheelchairs. It wasn’t until midway through Pearl Jam’s set that I realized I had been standing next to the “Bridge School” kids. Singer Eddie Vedder has played Neil Young’s annual concert, which benefits children with autism, 11 times since 1992.

“We’ve played [in the Bay Area] about 30 times,” Vedder said as the crowd roared. “More than we have anywhere else.”

Walking toward the right side of the stage, Vedder jumped down and began singing Wayne Cochran’s, “Last Kiss,” to Victoria, the same autistic girl I saw him serenade in 2011 in Mountain View.

Kissing her cheeks, Vedder sang, “Oh where, oh where, can my baby be?/The Lord took her away from me/She's gone to heaven so I've got to be good/So I can see my baby when I leave this world.”

Vedder, tightly holding a bottle of red wine, played an epically long set – taking requests until midnight. He started the second set with “Smile,” after a bearded, red-headed fan held up a cardboard sign and requested his favorite song.

In fact, the floor was filled with posters, many of which Vedder read and took onstage. Sharing wine with fans, he firmly gripped their hands as they perched him above their shoulders.

Backed by an assortment of hanging, multicolored lights, band members began swinging the giant bulbs. Soon Vedder climbed one and dangled atop the crowd. Later, he threw about 15 tambourines to eager fans. He was having a damn good time, and I think everyone felt the vibe.

The Seattle group started out in the early 1990s during the grunge-rock movement, when Nirvana, Alice in Chains and Soundgarden (Pearl Jam’s drummer is Matt Cameron of Soundgarden) dominated the music scene.

After more than two decades, guitarists Stone Gossard and Mike McCready, bassist Jeff Ament (who wore a Warriors jersey Tuesday night) and Vedder play like a bunch of 20-year-olds.

I admit, I was happy to hear “Setting Forth” from the “Into the Wild” soundtrack. Vedder wrote and composed the entire album after actor and director Sean Penn hand-selected the musician.

He also paid tribute to Lou Reed, who died in late October, by playing a version of the Velvet Underground’s “After Hours.”

The band played hits like “Betterman,” (from “Vitalogy”) “Porch,” “Alive,” and “Black,” (from “Ten”) as well as five covers including a duet with John Doe who played X’s “The New World,” near the end of the second encore.

Diehards began lining up at 8 a.m. Nov. 26, guaranteeing a front-row spot. Many have been following the Lightning Bolt Tour across the country – others came as far away as Brazil.

“I recognize these beautiful faces right here,” Vedder said of the front row, backed by some 16,000 enthusiastic fans. “You’re all beautiful. Every single one of you.”

Other than their headlining spot at 2009’s Outside Lands festival at San Francisco’s Golden Gate Park, Pearl Jam hasn’t played a full-length concert in the Bay Area since 2006, when the group played three nights at the Bill Graham Civic Auditorium in San Francisco.

Obviously buzzed, Vedder smiled and thanked the crowd, and gave Oracle a metaphorical middle finger when he played three songs after house lights were turned on. He somehow made the enormous room feel intimate. Closing with, “Indifference,” (from Vs.), I left feeling lucky to have witnessed such a unique performance. Definitely one for the books.

Elderly Woman Behind the Counter in a Small Town

State of Love and Trust